This is what can and often happens to a ceiling when an Air Conditioning system does not have a In-Line Float Switch (pictured in the bag).

We preach to customers about float switches if they don’t have one and this is why!

A float switch has a float in it that floats like a bobber on the waters surface should the water start backing up. It also has electrical leads that break the low voltage when this happens so the system can’t run and continue to produce more water. Once the system is shut down by the float switch no more water is produced and the system will not flood.

We always recommend a In Line Float Switch vs. a float switch in the secondary pan as the main drain line is the first to back up.

Want to double your protection?

We can put a In Line Float Switch and one in the secondary pan as well!

This ceiling damage could have been avoided as we recommended a In Line Float switch last year……. They put one in today, but the damage is done.

Don’t have a Float Switch? Get one and avoid this! 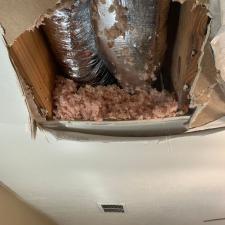 This Heat Wave we are having is a perfect example of why a Variable Speed Communicating system from American Standard should be considered! Most people see the price of one of these systems and im […]

Let's talk about one of your thermostat settings. Specifically, the "Fan" Auto vs. On. I see a lot of homeowners with this setting at the "On" position. Go check yours now and if it's positioned to " […]